Deek Diedricksen - Why use Tuftex? 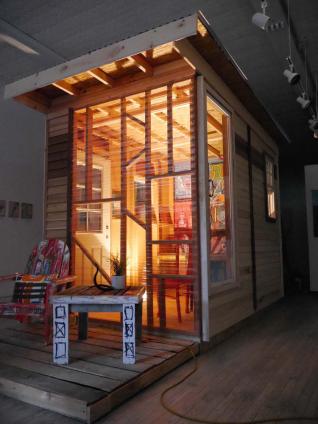 Ok, so here it is…. the reason WHY I use TUFTEX?

Honestly, I get asked this so frequently, and have almost predictably become the “TUFTEX Guy” because of the repeat use of these polycarbonate sheets in my work (tiny houses, tree houses, cabins, backyard offices, chicken coops, green houses, and even all my work for HGTV) that I felt I just needed to post my reasoning once and for all. This way, when people ask me this online, I can point them to this little piece here. Pretty clever/lazy, eh?

First off, I’ve been using TUFTEX PolyCarb in builds since around 2005, when with small spaces, I wanted to bring more light into these structures, but affordably. So right off the bat, my initial reasoning was a financially accessible means of opening up a space, while keeping it weatherproof. Simple as that.

But it goes beyond that. As the years went on, I continued to use TUFTEX PolyCarb panels. This was partly because my tastes in architecture changed, and because of an inadvertent diet of waiting-room magazines like Dwell, and Architectural Digest. I slowly began to favor the LOOK of “Sparse-Modern,” but not the price tag often associated with it. TUFTEX, with its corrugated and repeating ridge lines, worked REALLY well for this, AND on a budget. I didn’t and don’t have the budget Frank Lloyd Wright had, nor will I ever, so this was an effective means to an end.

I might also add in that I’m inpatient and that this stuff is a breeze to install. I want to see results right away and want to move on to the next step, so I soon found out that most of my TUFTEX walls or roofs could be installed in an hour or less- easily, and its use became a no-brainer.

The stuff is also durable as all heck – lightweight too. I have to transport and deliver a good many things I build and the last thing I need is highway winds destroying a see-thru wall on my cabin, OR a cabin so heavy that it becomes more difficult to deliver. Also, when building off-grid, as I often do, carrying heavier materials deep into the woods gets old REALLY fast as you can imagine.

And, I guess I should add that I am pretty attracted to the fact that this stuff is made in the USA. You really don’t see as much of that as I’d like!

So, there’s my case, my explanation, and the reason why I’ve been using this stuff for about a decade now.